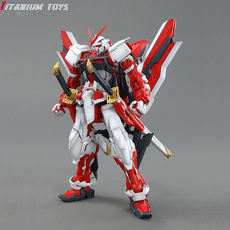 Add To Bag! Check Out!

Merek : Daban Models
Specification:
Tinggi 18,0 cm, Skala 1/100
Like the Blue Frame, Lowe Guele's Astray Red Frame Kai boasts amazing articulation through the generous use of poly-caps. Once assembled, this MG will be able to stand in a variety of poses wielding its weapons. Its backpack can easily take on a several forms with some simple changes. As 'Tactical ArmsIIL' it can change between Flight Form, Delta Form, and V form. Its Sword Form changes to Work Form, whereas Arrow Form takes the shape of a giant bow. The Beam Torch can be held in the mech's hand or attached to the Arrow Form. The MG Astray also comes with its two signature katana; Gerbera Straight forged by Kiku Ichimonji and Tiger Pierce by Kotetsu. The two katana even feature signatures carved into the handles!! Two 1/100 scale figures of Lowe Guele, one sitting and one standing, are also included plus dry transfer decals and stickers for markings.